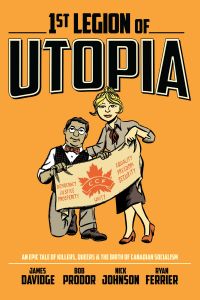 Set amidst the riotous times of the Great Depression, 1st Legion of Utopia explores the forces surrounding the founding of the Co-operative Commonwealth Federation (CCF), the trail blazing party of first female Member of Parliament Agnes Macphail and Tommy Douglas, the leader most instrumental in Canada adopting what has become one of our defining policies - public health care The CCF went on to become the modern day NDP. Holly Burnside (THIRTEEN MINUTES) and her friend Brian Mah find themselves caught up in a violent world of social unrest, political excitement, and pansy clubs.