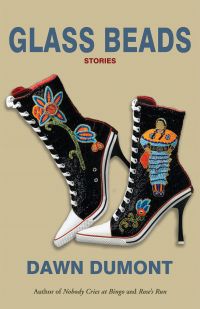 These short stories interconnect the friendships of four First Nations people — Everett Kaiswatim, Nellie Gordon, Julie Papequash, and Nathan (Taz) Mosquito — as the collection evolves over two decades against the cultural, political, and historical backdrop of the 90s and early 2000s. These young people are among the first of their families to live off the reserve for most of their adult lives, and must adapt and evolve. In stories like “Stranger Danger”, we watch how shy Julie, though supported by her roomies, is filled with apprehension as she goes on her first white-guy date, while years later in “Two Years Less A Day” we witness her change as her worries and vulnerability are put to the real test when she is unjustly convicted in a violent melee and must serve some jail time. “The House and Things That Can Be Taken” establishes how the move from the city both excites and intimidate reserve youth — respectively, how a young man finds a job or a young woman becomes vulnerable in the bar scene. As well as developing her characters experientially, Dumont carefully contrasts them, as we see in the fragile and uncertain Everett and the culturally strong and independent but reckless Taz. As the four friends experience family catastrophes, broken friendships, travel to Mexico, and the aftermath of the great tragedy of 9/11, readers are intimately connected with each struggle, whether it is with racism, isolation, finding their cultural identity, or repairing the wounds of their upbringing.

Dawn Dumont is a columnist for the Saskatoon StarPhoenix, the Regina Leader-Post, and Eagle Feather News, and is the author of two books, Rose’s Run (2014) and Nobody Cries At Bingo (2011). She has previously written for the Edmonton Journal and CBC Radio, and has worked as a stand-up comic making people laugh at clubs across North America including New York’s Comic Strip, the Comedy Club, the Improv, and Toronto’s Yuk Yuk’s and the Laugh Resort. She lives in Saskatoon.