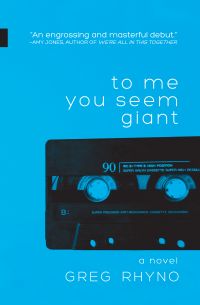 It’s 1994 and Pete Curtis can’t wait to get out of Thunder Bay, Ontario. Already, he’s playing drums in a band whose songs belong on mix-tapes everywhere. Even though his new girlfriend seems underwhelmed, he knows it’s just a matter of time before he and his pals break big.

Ten years later, Pete is stuck teaching high school in the hometown he longed to escape, while his former best friend and bandmate is a bona fide rock star.

In his debut novel, with its compelling hook and realistically flawed characters, Greg Rhyno remembers the time signatures of mid-nineties. Told in two alternating decades, To Me You Seem Giant is a raucous and evocative story about the difficulties of living in the present when you can’t escape your past.

Praise for To Me You Seem Giant"A brooding tenor – combined with a lifelong love for music that manifests itself in new ways as he ages – lends Pete’s character a believable continuity."~ Becky Robertson, Quill & Quire“To Me You Seem Giant is ultimately a touching and hopeful reminder of the need to confront the demons of your past in order to move on.”~ Alexander Kosoris, The Walleye"Underneath the layers of rock and roll is a compelling tale of lost loves, backstabbing bandmates and wondering where it all went wrong."~ Steven Sandor, Avenue Edmonton

Greg Rhyno was born in Toronto, Ontario, but grew up in Thunder Bay. His fiction has appeared in PRISM international and he is a recipient of the J. Alex Munro Prize for Poetry. In addition, Rhyno has toured and recorded with such rock n’ roll outfits as The Parkas, Phasers On Stun, and Wild Hearses. A few years back, Umbrella Music called his songwriting “some of the smartest 20-something observations since Ron Hawkins fronted Lowest of the Low.” His music has been licensed to television and film, including shows like Scrubs, Greek, and Dawson’s Creek. Currently, he works as a high school teacher and lives with his family in Guelph, Ontario.