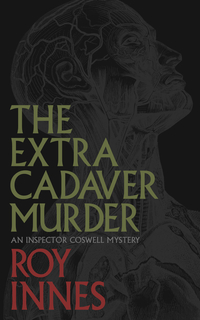 RCMP Inspector Coswell is back. A university professor is murdered and his corpse is revealed to a first year anatomy class in spectacular fashion—nude on a slab alongside shrouded medical cadavers. He begins his investigation with Corporal James, his long time assistant, but is abruptly assigned a new partner, a female officer who arrives under a political cloud. Already depressed by his perceived plunge into senility, Coswell struggles to stifle his own gender biases and work effectively with this woman.

Their list of suspects grows: failed students, a jealous colleague, an intriguing ex-wife and a criminal cartel. Clues emerge that send them all over the city of Vancouver from UBC campus to downtown and its gourmet restaurants.

Roy Innes is a retired eye physician and surgeon whose penchant for the arts, buried for years in the world of science, was rekindled upon retirement. His first Inspector Coswell novel, Murder in the Monashees, was released in 2005 and was followed in 2008 by West End Murders. Innes is an avid hunter, a lover of classical music, and, despite his skinny frame, a gourmand. He lives on British Columbia's lush Gabriola Island with his wife Barrie and his daughter's cat.