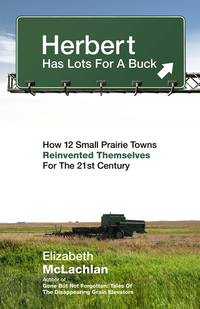 "Canada in the twenty-first century is a place of growth and expansion. Cities like Vancouver and Toronto have become word class destinations for business and tourism. Meanwhile, smaller, less prominent communities face changes of different sorts, as residents depart for the opportunities present in our country’s largest cities. Nowhere is this more apparent than in Canada’s prairie provinces.

Despite changes in population and the loss of such essential services as schools, post offices, and grain elevators, many of Canada’s oldest prairie communities—communities like Craik and Meacham in Saskatchewan, and Vulcan in Alberta—have defied the odds, facing death only to rise again.

In Herbert Has Lots for a Buck, Elizabeth McLachlan investigates how these communities have capitalized on green initiatives, the growing influence of local artists, and even an uncanny connection to one of Star Trek’s most famous icons to not only survive beyond expectations, but thrive.

Elizabeth McLachlan was born in Coaldale, Alberta, and feels fortunate to have lived in eleven rural communities throughout the province. She currently resides in Lethbridge, Alberta, where she works as a freelance writer, editor, and public speaker. Elizabeth has previously published three books with NeWest Press: With Unshakeable Persistence, With Unfailing Dedication, and the best selling Gone But Not Forgotten. Herbert Has Lots for a Buck is her fourth book.